The market started the week at SPX 2384. After a rally to SPX 2394 on Monday the market pulled back to 2380 on Wednesday, and retested it on Thursday. Then the market rallied to end the week SPX 2399, its highest level since March 1st.

For the week the SPX/DOW gained 0.45%, and the NDX/NASgained 1.0%. Economic reports for the week were generally positive. On the downtick: the Q2 GDP estimate, the WLEI, the PCE, construction spending, ISM manufacturing and the ADP. On the uptick: personal income, auto sales, ISM services, factory orders, monthly payrolls, consumer credit; plus weekly jobless claims, the trade deficit and the unemployment rate all improved. Next week’s highlights: the CPI/PPI, retail sales and wholesale/business inventories.

We continue to believe a secular growth cycle began in 2016, following 16-years of a secular crisis cycle. During the crisis cycle we experienced a dotcom bust, 9-11, a war in the Middle East, a housing boom/bust, an international banking crisis, quantitative easing, US debt nearly quadrupling, and the middle class nearly became extinct. In response to this, the US electorate choose a businessman who had a plan and campaigned on Making America Great Again.

It’s the right time, hopefully its the right person. If not, they will choose another in four years. Despite some character flaws he has the Saeculum in his favor, and we think he will succeed. If correct the secular growth cycle should last 16-20 years. 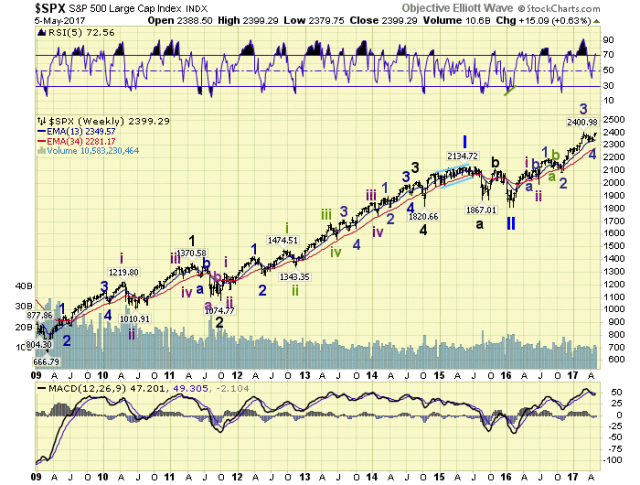 The recent Minor wave 4 correction, which lasted a bit more than a month, was a bit tricky in that it only corrected about 3%. And the NDX/NAZ did not correct at all. These two sectors, cyclicals and tech, have completely diverged in their wave counts creating a bifurcation in the market. This divergence allows for the possibility that despite the uptrend in the SPX/DOW, it may still be part of Minor wave 4. We consider this an alternate count, and are going with the Minor 5 scenario. 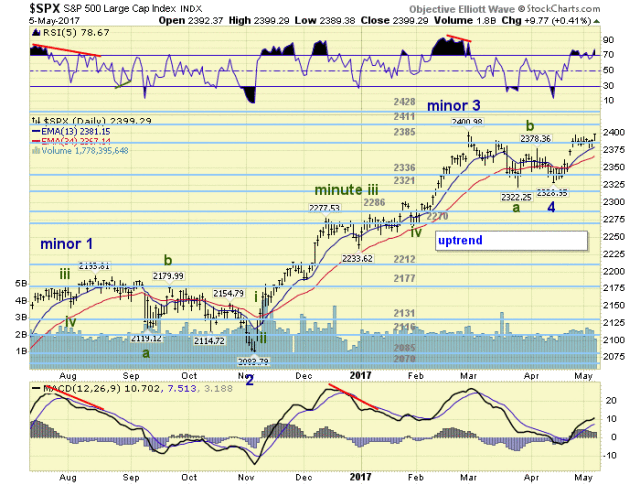 With the new high on Friday, for this rally from the SPX 2329 low, the key level to watch going forward is SPX 2361. Should this level be broken on the downside then the uptrend is probably a B wave. If not, the next likely target for the SPX is 2500+. Naturally the 2411, 2428 and then 2488 pivots will have to be exceeded to reach that level. But the uptrend is only three weeks old at this point and has plenty of time. 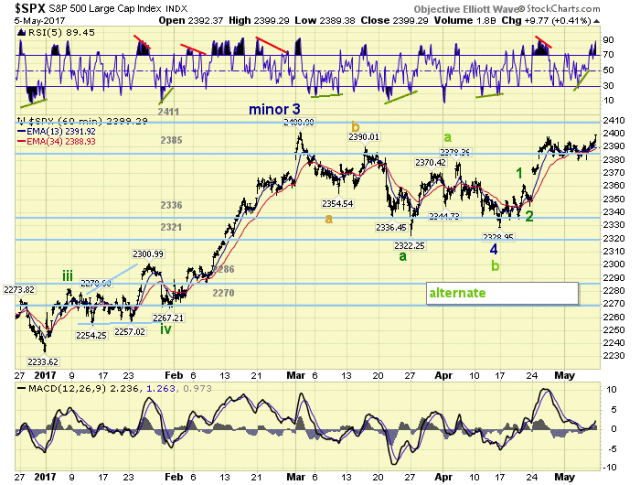 Short term support is at the 2385 pivot and SPX 2361, with resistance at SPX 2401 and the 2411 pivot. Short term momentum ended the week quite overbought. Best to your trading with the French election ahead on Sunday.